Moki Cherry was a Swedish interdisciplinary artist and designer who worked in tapestry, fashion design, painting, music, collage, woodwork and ceramics. She worked with materials that have a relationship to functionality and themes relating to nature and spirituality. Moki envisioned her life and work as part of an aesthetic utopian vision of ‘home as stage, stage as home’, in which her artworks were experienced in the home, in music and theatre performances, and in art galleries.

Moki Cherry was born in Norbotten, Sweden in 1943. While growing up her family moved around the country to wherever her father ran the station house and her mother the post office. Since early childhood Moki was absorbed by the world of animals and nature, choosing to spend most of her time in the forest instead of with other children. Moki moved to Stockholm in 1962 to study fashion and textiles at Beckman’s School of Design. Her practice later developed into painting, tapestry, music, set design, theatre, sculpture, ceramics, and collage.

Moki first met the jazz musician Don Cherry in 1963 in Stockholm, while he was on tour with Sonny Rollins. In the following years Don returned to Stockholm on various tours and eventually he and Moki decided to build a life together. After graduating from Beckman’s in 1966 Moki travelled to New York to work in fashion design, but instead the collaborations between her and Don began to take centre stage in her life. While Don was recording the record Where is Brooklyn? (Blue Note, 1969) Moki created the album artwork, which was the first of many album covers that she made for his music. During this time in New York Moki began making paintings, tapestries, and costumes, of which many were used to create colourful environments for Don’s performances and albums.

In 1967 Moki and Don started Movement Incorporated, an art and music project that they renamed Organic Music, or at times Organic Music Theatre. Their first concert took place at ABF Huset in Stockholm. A group of musicians and dancers were invited to take part, and Moki created costumes, posters, stage sets, and a live painting during the performance. A few days later they organised a similar happening at Kunsthal Charlottenborg in Copenhagen. This is how the Organic Music tours and workshops began.

In 1968 Moki, Don and their two children, Neneh and Eagle-eye, left Stockholm for good. The family moved around Europe and the USA for the next two years with no fixed home. They lived in Vermont, close to Dartmouth College, where Don was invited as a music professor and artist-in-residence for two semesters in 1970. While in Vermont, Moki and Don organised an “opera” with over 100 students at Dartmouth. Moki designed the costumes and sets, and their home acted as a rehearsal space on weekends. Later that year the Cherrys bought an old schoolhouse in the south of Sweden that became the family home. Inspired by their time in Dartmouth, the schoolhouse became a creative and educational hub for musicians, artists, friends and their children. The schoolhouse was a base for the family while they continued to tour with Organic Music performances and workshops in Europe, USA and Japan.

In 1971 the Cherrys were invited by the curator Pontus Hultén to take part in Utopier och Visioner 1871-1981 (Utopias and Visions 1871-1981) at Moderna Museet in Stockholm. For three months the family lived at the museum and ran daily workshops and happenings in a geodesic dome built by artist Bengt Carling. Inside the dome Moki created costumes, tapestries, sculptures and paintings on a daily basis, including a large Mandala that she gradually painted on the floor. Throughout the 1970s Moki’s artistic vision continued to develop and transform alongside touring and raising two children. Her practice traversed the worlds of art, music and theater with diverse influences such as Indian art and music, Tibetan buddhism, fashion, traditional folk arts and dress, abstraction, cartoons and Pop art.

Moki had her first solo exhibition in 1973 at Galleri 1 in Stockholm, which featured tapestries, paintings and live music performances. In 1975 they set up Tågarp Skola Kulturförening (Tågarp Culture Collective), to arrange public art, theatre and music events at the schoolhouse. During the summers of 1978-85 Moki and her friend Anita Roney ran a youth theatre group in Tågarp called Octopuss Teater, with annual end of term performances at Moderna Museet in Stockholm.

From the mid-70s onwards the Cherry family lived between Sweden and New York City . They rented a loft in Long Island City in Queens, which Moki built into a living space and studio. Moki began to focus more on her personal artwork and in 1979 she had a solo exhibition of tapestries at Lyn Kienholz’s gallery, LAX814, in Los Angeles.

During the 1980s Moki and Don collaborated less, but from time to time she designed album artwork and clothing for Don and his bands CoDoNa and Old and New Dreams. They separated at the end of the 1980s, Don moved to San Francisco while Moki continued to live between Sweden and New York. Moki frequently exhibited in both places, and her work progressed into sculpture using wood and electric light, ceramics, and collage. She returned to painting and tapestry in the last few years of her life. Moki Cherry died at home in Tågarp on August 29th, 2009. 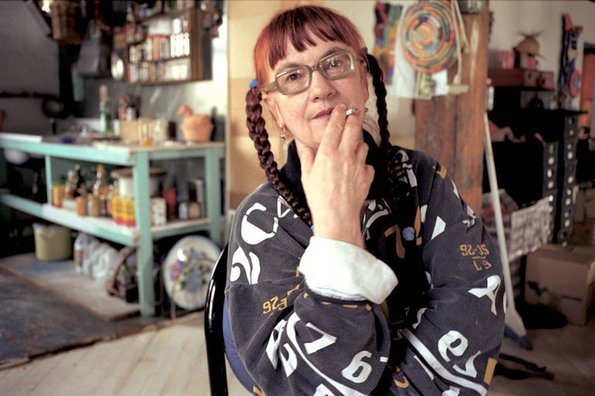 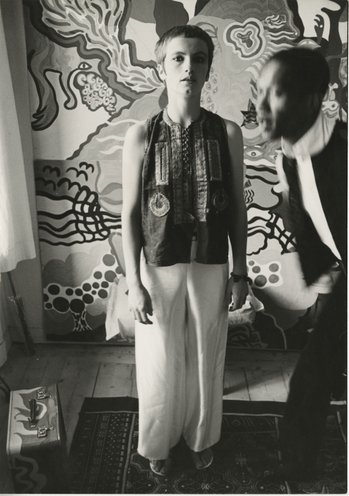 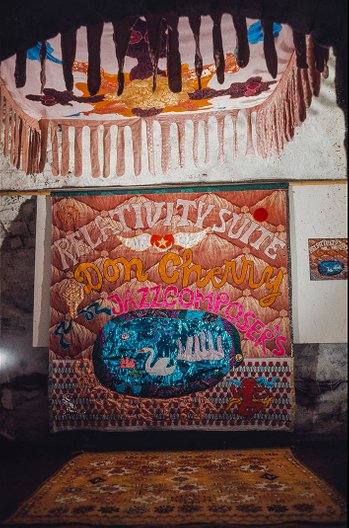 'Moki Cherry’s tapestries access, move between and make reference to the distinct spaces of home, stage and museum due to the status of her artworks in these environments. The layered mobility of Cherry’s tapestries enabled the artworks to exist in multiple spaces across time, while being at tension with a fixed definition within each distinct environment. By doing so, they created an aesthetic that interlinked these spaces through their capacity to build an unfixed and mobile enclosed textiles environment, a "secondary-space", in each context of display.' - Evie Ward, 'A Biography of Tapestry: Moki Cherry: Home, Stage, Museum', 2018

'I feel love - rage - care - when I work.
I cut out shapes with different tools - in a variety of material - wood - birch plywood - chickenwire tin - fabric - fabric - paper. Clay is different - because what hides inside comes out.
I paint everything with Flashe paints (originally made for murals), they have the best luminous-forever-lasting pigments - with a very flat dry surface - which I love.
Fabric - I use more for color & shape than texture - (it might change).
Working - I am very slow and at the same time intense deadlines are my best lifelines. The subconscious moves in to rule and I become the tool.
Other times I spend a lot of time just looking at the work I am involved with. (The moment when the work tells me it’s done is quite liberating). I look for small moves and big decisions to be made so the work can (will?) emit some kind of life.
The woodwork as I call it - includes electric light - where the actual lamps are hidden so the work glows from within. It usually takes the form of wall sculpture.
Since June 2003, I have worked mostly with photomontage. I find it a good vehicle to reflect the current situation we are living and existing in. It being appropriated material matters a great deal. I have collected magazines etc. for a long time with the plan to make collage at some point.
It started late 1990s-2000 when I collaged furnitures - objects - walls - floors with printed matter global newsprint and photos. It amused me that if we don’t know the letters of the language we are lost (informationage!)
A coincidence got me started to make individual collage images - it is a very interesting expedition to find the images - coming from all sources sometimes spending 50-60-70 years in one image and bring it to a feeling of nowness and concern is very exciting - like a ball that started rolling in ancient time connects everything.'
- Moki Cherry, unpublished writings, circa 2007